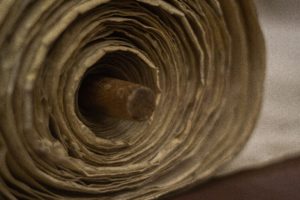 In our first post of this series, we talked about revelation—about how God reveals Himself to us through Scripture. In the second post, we looked at inspiration—how God inspired the Scriptures. In this article, we’ll talk about the third word, canonization.

Have you ever wondered where the Bible came from? Or why it’s made up of so many books? Why were some books included and others weren’t?

And who decided what went into it?

"Canonization is the process by which the early church leaders received, recognized, and arranged the individual books into the official Bible."

Canonization is the process by which the early church leaders received, recognized, and arranged the individual books into the official Bible.

Contrary to what it sounds like, the word canon is not a weapon that shoots big shells toward your enemy. It literally means measuring rod. How does something measure up to the standard or rod?

Before the books of the Bible were pulled together into the canon of doctrine, many sacred writings were being circulated. But which ones were orthodox? Which were in error?

Biblical experts compared the books to each other—measured them against each other—to determine those that were relied upon the most, those that were clearly of divine origin, and many other factors. The process took several centuries.

The Museum of the Bible has produced a short video that contains the clearest explanation of canonization I’ve ever seen. Check it out here.

Understanding how the books of the Bible were put together can underscore for us the authority and authenticity of scripture. It can also strengthen our conviction and assurance that the Bible is God’s Word, breathed out for all of us who believe.

*****
Phil Tuttle is the president of Walk Thru the Bible.