The Search for Happy Christianity

I was depressed for most of my younger years.

I’m sure some of that had to do with brain chemistry—depression runs in the family—but, as I’ve learned since then, much of it had to do with being steeped in negative thought patterns. From the people around me and lots of unintentional practice, I learned the strange art of pessimism early on. 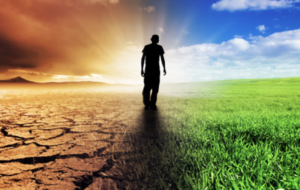 And it is an art. A person has to be pretty creative to see the entire range of possibilities in every situation and expect a bad one virtually every time.

At one point in my life, I had thought that solid Christian teaching would help me with that. Unfortunately, Christians have a long history of fueling negative expectations even while claiming strong faith.

For example, centuries of emphasis on penitent attitudes and self-denial have convinced us that serious expressions and subdued expectations are holy—that the biblical instruction to be sober-minded translates into being somber.

We’ve been taught that God will always give us what we need—but only that, and not much more, and certainly not what our hearts actually desire. The Giver of all good things is said to define “good” in ways that make sense in eternity but aren’t very satisfying right now.

The Giver of all good things is said to define “good” in ways that make sense in eternity but aren’t very satisfying right now.

A Gospel of Relentless Hope

I’ve written quite a bit in my devotional books* about how the Bible steers us away from negative thinking—how almost every stern prophecy is lined with promises, for example, or how many psalms begin in crisis but end with promise and celebration. They are virtual case studies in shifting from pessimism to hope.

I’ve also written about Paul’s radical insistence on seeing the bright side in every situation. My favorite examples are in the first chapter of Philippians, where he has three tempting opportunities to get discouraged and instead celebrates his adversity.

As a prisoner, he could easily have wondered what went wrong in his life, gotten discouraged that God seemed to have put him on the shelf, or lamented the injustice of the system. Instead, he was practically giddy over the opportunities he had to share the gospel with guards and palace personnel.

While other preachers were using Paul’s message for self-promotion, he could have blasted their distorted gospel or attacked their self-focused methods (as many are far too fond of doing today). Instead, he was actually happy that the name of Jesus was getting out there.

And in realizing that his imprisonment could actually end in death, he could have lamented missed opportunities and the end of a ministry. Instead, he thought, If I live, I bear more fruit; if I die, I get to be with Jesus. Not sure which is better, but either way, I win!

Your Bible Is Filled with Positive Expectations

It’s true that the gospel goes deeper than positive thinking and that a lot of positivity preachers have abused the message. (I’ve actually been accused of “positive-thinking crap” by a critic or two—to which, coming from my ultra-depressed background, I smile wryly and count it a badge of honor.)

Regardless of the distortions out there, the Bible is full of irrepressible hope, huge promises, and against-all-odds victories. And we are told to embrace them with hearts full of anticipation.

We are called to be people of unquenchable hope and expectation—to interpret every situation in light of the good things God is doing in it and to expect our lives to overflow with His goodness.

To do that, we have to overcome centuries of negative patterns in Christendom and perhaps years of them in our own lives. But if we do, we change the world. We reflect the nature of God. And we point toward eternal values that can never be shaken.

*****
Chris Tiegreen is an award-winning author of more than 50 books as well as indeed devotional magazine. You can read more by Chris at chris-tiegreen.com

You can find books by Chris here and indeed devotional magazine here.