“Jesus saved my life once upon a time, and then he kept doing it every single day since then.”

When Jennifer Dukes Lee says this, she probably has a very different idea of what “saved my life” means than much of the rest of the world. We often see a “good life” as one fueled by ambition, career achievement, and financial gain. Many years ago, Jennifer would have agreed. She was a successful political reporter married to a successful lawyer building a life marked by…success. As she puts it, “We were on the Jennifer and Scott Lee show.” People kept telling her she was on the cusp of something great, about to enter the prime of her career. So when she and her husband, Scott, decided to leave everything they had worked for behind, to uproot their lives and move back to a fifth-generation family farm, to start living simply and slowly off the land instead of diving headfirst into the rat race, people thought they had officially lost their minds.

But this was God’s way of saving Jennifer’s life. Her growing up years had been centered around the church, but she couldn’t help but wonder, was this faith actually real? Was Jesus a person who actually existed in the world 2000 years ago? And if He was, then was He actually the Son of God? How could she reconcile the tenets of faith she learned in Sunday school with the pain and death she was seeing in the world every day? “A lot of people will say, ‘You’ve got to pull 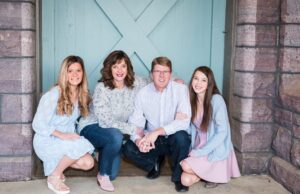 your faith from your head to your heart.’ But for me, it was the reverse. I wanted in my heart to believe that the stories were true,” she recalls. “But I just couldn’t intellectually get into the whole idea.”

When she couldn’t find answers to these questions about her faith, she started putting all of her energy into answering different kinds of a questions as a reporter. Her job became her life and identity. But thankfully, we serve a God who is bigger than every question we could ever ask Him, and He delights in answering the cries of His children. As Jennifer was spending hours in her car chasing down stories, she found a Christian radio station. The programs she heard began to stir her heart. “I would listen to different speakers…talk about Jesus in a way that really touched something in me. And their faith seemed so genuine.” Then she started diving into Scripture, reading about who Jesus actually said that He was, getting real answers from the source of all truth. “I began to interrogate the Bible in the same way I interrogated police chiefs and presidential candidates.”

“I began to interrogate the Bible in the same way I interrogated police chiefs and presidential candidates.”

Then, God started throwing her curveballs. Jennifer found out she was pregnant, and she had no clue how she and Scott were supposed to raise a child together when they barely even saw each other. Her world was also rocked by the terrorist attacks on September 11, 2001. She explains, “We were already coming to that age in life where you begin to question what is the meaning of life and what’s my purpose. That moment in history had a way of shaking us down to the thing that mattered most.” One year later, they were building a home in the last place they thought they’d ever be—the family farm.

In her new book Growing Slow: Lessons on Un-hurrying Your Heart from an Accidental Farm Girl, Jennifer walks through exactly how God saved her life by moving her from the fast lane to the farm. In a world moving at lightspeed, this concept of “un-hurrying your heart” could not be more relevant or important for us today. For Jennifer, it’s been a completely new and profoundly impactful way to approach life.