Heartache, Disappointment, and a Crisis of Faith

Are you facing heartache? Disappointment? A crisis of faith?

The story of Ruth and Naomi captures all of these and more; but the book of Ruth also captures the heart of God, the goodness of God, as He orchestrates it all.

The Period of the Judges

Not everyone in the semi-anarchic period of the judges was lawless. A beautiful love story shows us a family and a community that lived faithfully in relationship to God. It takes place in hard times, as most good love stories do but the hard times are overshadowed by the goodness of God, who orchestrates His favor toward those who are faithful to Him.

The story begins tragically, after a drought—one of the consequences of Israel’s disobedience—caused a family to go searching for livelihood in neighboring Moab. This is no small gesture; it’s this family’s rash statement that perhaps the Promised Land isn’t all that promising and maybe the rival nation’s land is better. After all, plenty of people who remained in the land, including those we meet later in the story, are enjoying a harvest by the time the family returns. But this family of four had decided to seek sustenance elsewhere, and things haven’t gone well. Naomi’s husband dies, and then her two sons die. She is left as a true widow with no one to take care of her but her two widowed daughters-in-law. And she is rather bitter about it.

In a sense, the book of Ruth is really the story of Naomi—of how God meets the needs of a bitter woman and restores her back into the Land of Promise and into the people of God. But along the way, it becomes the story of Ruth, a foreigner who selflessly commits to care for her mother-in-law and identify herself with God’s people.

Upon returning to Bethlehem, Naomi’s hometown, Ruth finds work at harvest-time in the fields of Boaz, one of Naomi’s kinsmen. At Naomi’s instigation, Ruth rather daringly goes into the fields at night to let Boaz know of her desire to marry him. Though no immoral behavior is implied, Israelite culture attached quite a few connotations to a single woman being out at night; sleeping in a field full of men who have been drinking, and not coming home until morning. It’s a racy move; albeit with pure motives. When Boaz discovers her asleep at his feet, he symbolically covers her and becomes a picture of redemption. After cultural protocol is followed, Boaz and Ruth eventually marry and bear children. Naomi’s inheritance has been restored to her, and Ruth becomes the great-grandmother of King David and an ancestor of the Messiah.

Ruth is a small book with huge themes; a rich picture full of deep truths. It shows us God’s heart to restore bitter souls and redeem broken lives. No calamity is beyond His ability to reverse with His goodness. In Naomi, we see someone who had given up finding a rewarding place in the eternal plan. In Ruth, we see a foreigner who would be scorned in normal circumstances become an integral part of the people of God simply by showing admirable loyalty and love in an every-man-for-himself era. In Boaz, we see a man with no heirs being given a new bride, a new family, and a fresh start in life. And in God, who quietly authors the story, we see a tender, romantic heart, a provider in hard times, and a Redeemer who has His eye not only on the chosen nation, but also on Gentiles who display His nature and accept His ways. It’s a small fulfillment of the covenant He made with Abraham to bless those who bless the Jews. And it’s a powerful foreshadowing of how God will draw many into His Kingdom at a harvest festival many centuries later by pouring out His Spirit on Jews and Gentiles alike.

The Book of Ruth is a case study in the scriptural truth that God lifts up the humble and draws near to the brokenhearted. Even in our deepest disappointments, He finds way to make our lives meaningful and bring us into a place of fulfillment. This process can take a frustratingly long time, but when we demonstrate faith and patience, He makes sure it ends well. And it’s always worth the wait.

In 90 Days Thru the Bible, acclaimed author Chris Tiegreen guides you through the major sections of Scripture, meditating on how each story and theme beautifully contributes to God’s great story. You’ll come to understand the heart of God, and His awe-inspiring story of redemption, like never before.

Underneath this journey through Scripture, underlying even the Bible’s very existence, is a truth often unacknowledged in this world: God speaks. He is not silent. By implication, this also means He is not distant nor indifferent. No, our God is a communicator. He has desires and purposes and answers to impart. He wants to be known. And He speaks to us.

This book explores the Word that has been revealed. It will help us understand the often-obscure collection of inspired writings comprised by Scripture, and it illuminates huge, life-altering themes that give our lives meaning. And somewhere in the process, we will hear the voice of the One who speaks. 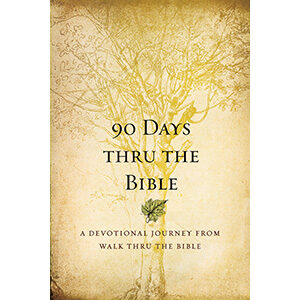 Journey through the God’s Word this summer with 90 Days Thru the Bible!