A few months ago, Boris Volkov and his family were living a peaceful, beautiful life in Kiev, Ukraine. Boris, Walk Thru the Bible’s Regional Director for Northern Eurasia, was working daily with pastors and ministry partners throughout Ukraine to train and resource them to teach people God’s Word. Over the past year, he and his team had started teaching Refuge: Finding Home in a World of Change, one of our newest Biblical Character Series courses based on the life of Ruth, Naomi, and Boaz. While Boris liked the material, he was trying to find a way to make it more relevant to the people of Ukraine and Eurasia.

He explains, “For me, the red thread of this course was actually caring for refugees and displaced people. I was thinking to myself, ‘There were a number of refugees from the war, from the frontline area, back in 2014 in Ukraine, but it’s not that prevalent anymore. So, let’s focus on other aspects of displacement, for example, such as in terms of searching for a job or moving for school, displacement because of divorce or the death of a loved one, and more.’”

Essentially, life for Boris and his family and the Ukrainian people was normal. The concept of encountering a refugee, much less being a refugee, was not one many people would find relatable. 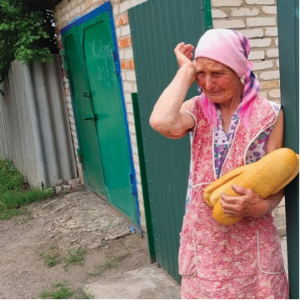 Then came February 24, 2022. The world watched in horror as Russia invaded Ukraine, transforming Boris’s peaceful home into a warzone. Like millions of other Ukrainians, Boris and his family found themselves in the middle of a war, and were forced to leave their home, their neighbors, their friends, all that they knew. Suddenly, Ruth and Naomi’s story became his own story—the story of a refugee, the story of a displaced people.

Boris shares the painful, harrowing, and ultimately grace-filled journey that he and his family have experienced since February. Though he had to leave his home, he did not leave behind God’s call on his life to ministry. God immediately began opening up doors for Boris to teach Refuge to displaced Ukrainians across Europe. In fact, he even had the opportunity to  translate this study into the Ukrainian people’s heart language and record it as a video series—and that Refuge recording was broadcast on satellite TV and made available to people serving in refugee camps, to pastors ministering to people who come through their church doors, and to those ministering on the frontlines. While Boris was initially unsure how much this curriculum would resonate, he now sees that God ordained Refuge to reach his people during this exact time. Ukrainians are hearing a lot of messages right now, but he believes the story of Ruth might be the most needed.

As a refugee himself, Boris says, “I would prefer to hear something that warms up my soul, my broken spirit, revitalizes my faith. I don’t know where, and I don’t know how…but God wants me to find a home in this changing world.”

He has seen that other refugees are having the same experience. “I also testify that when I was teaching this course live in refugee camps in Poland and Czechia and Romania, I saw people reflecting on this important curriculum not in the way theologians would, but in the way starving, thirsty souls absorb waters of hope.”

Pastor Vadim Chubikin agrees. A long-time partner of Walk Thru the Bible Ukraine, he was the pastor of a prison ministry, but due to the war, his work has changed—the prisons in the region where he served are either in now-occupied regions or the people have been evacuated to safer regions.  So Pastor Vadim and his co-ministers are now working with refugees and people in the frontline area. 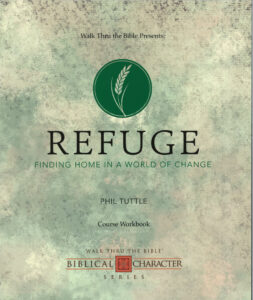 working or incorporating the material into his messages of hope to suffering people. He says that Refuge is one of the best tools in his ministry toolbox for these days. “There was not a single sermon that finished without tears on people’s cheeks,” he says. “It is not my desire to increase their emotions. It is the story of Ruth that speaks directly to their hearts through the Refuge course.”

“Many people were living a normal life,” says Pastor Vadim. They were not rich or poor, but they were self- sufficient, with a home, a job, and food on the table. “But these self-sufficient people became refugees or became impoverished to the point where they needed housing and food assistance,” he says. And because people were living their lives, going about their day-to-day, no one expected all of the death and destruction and chaos, or having to flee to safety.

“In all the darkness of these heavy days,” says Pastor Vadim, “God began to write a new history of the church in Ukraine. Evangelical churches are actively involved in various work aimed at helping people in need. They are helping to evacuate people and delivering food and water. And, of course, this is an opportunity to point to the One who has a word of compassion and the words of eternal life,” he says.

According to Pastor Vadim, one of the tools that the evangelical churches are using is our Refuge course. “As never before, the story of Ruth, Naomi, and Boaz has become relevant and healing for so many wounded hearts,” he says.  He shares how the people eagerly absorb these words of hope when churches minister to and support the people in the frontline areas and the cities where refugees live. Churches are seeing more and more people coming to their services that have not been to church before.

“While for many people the trajectory of life is still going down, a look from God’s perspective gives hope that our good God, our Savior and Redeemer, wants to bring the wanderer to their true Home,” says Pastor Vadim.

When Walk Thru the Bible develops a new course, whether it’s in the Biblical Character Series or some other series, we have no idea how or where God will use it. But we hear story after story of where our courses have gone—to teach prisoners in a prison in Alabama; to teach public school children in Nigeria; to teach police officers in Manila; to teach college students in Johannesburg; and so much more. “Who knew that two years ago, when our team in Atlanta was developing Refuge, that it would connect so perfectly with so many Ukrainian people who now find themselves displaced?” says Phil Tuttle, Walk Thru the Bible’s president. “And who knew this new resource would bring hope to so many refugees both inside and outside Ukraine as well as clearly presenting the Gospel to help them find their eternal home? And who knew this resource would be used by pastors and church leaders and church members in other Eastern European countries to minister to Ukrainian refugees who have migrated to their countries? We sure didn’t know, but God did.”

And God is bringing hope to people in this war-torn country through Walk Thru the Bible.

Find out more about Refuge: Finding Home in a World of Change.