I’ve been spending some time in Psalm 1 recently and have been reminded just how important delighting and meditating on God’s Word is. Here’s how the CSB renders it (note the use of “happy” in verse one for the Hebrew asher, often translated “blessed”):

How happy is the one who does not
walk in the advice of the wicked
or stand in the pathway with sinners
or sit in the company of mockers!

Instead, his delight is in the Lord’s instruction,
and he meditates on it day and night.

He is like a tree planted beside flowing streams
that bears its fruit in its season
and whose leaf does not wither.
Whatever he does prospers.

Therefore the wicked will not stand up in the judgment,
nor sinners in the assembly of the righteous.

In order to delight and meditate on the law of the Lord, we must understand correctly what Scripture actually says. As people respond to my books, ask questions, and state opinions through emails and social media, I’m struck with how many say they believe the Bible, but their interpretations are so out of line with credible biblical meanings that their profession of confidence in Scripture becomes meaningless, and even dangerous. Not only is this happening more frequently today, it’s also being accepted as normal.

In order to delight and meditate on the law of the Lord, we must understand correctly what Scripture actually says. 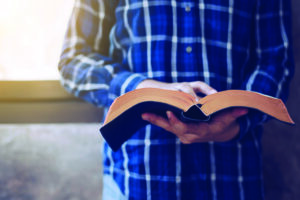 Historically, theological liberals denied Scripture, and everyone knew where they stood. But today many so-called evangelicals affirm their belief in Scripture, while attributing meanings to biblical texts that in fact deny what Scripture really says. Hence they “believe every word of the Bible” while actually embracing (and teaching) beliefs that utterly contradict it.

I’m not talking about mere differences within the sphere of orthodoxy, such as the debates between Calvinists and Arminians, or various interpretations for some of the most difficult problem passages or intramural squabbles about spiritual gifts or ordinances or church polity. I’m talking about people believing and confidently affirming that Scripture says what no one in the history of the church ever believed it says—or some people did say it but were easily recognized as heretics. (Universalism is just one example among many, though an important one.)

We rightly call upon people to read their Bibles, but it seems many spend much more time reading INTO the Bible than reading OUT of it. So nearly everything they read becomes merely an echo of what they already think or what most people around them are already saying. God gave us His Word to teach, rebuke, correct, and train our thinking (2 Timothy 3:16), not so we could interpret it away into something that’s just a mirror image of our preferred beliefs.

You can believe in the inspiration and even inerrancy of God’s Word, but because your subjective interpretation doesn’t center on the author’s (and Author’s) intention, but on what seems right to you and the secular or church culture, the Bible isn’t really your authority. You don’t let it correct your thinking but walk away with an interpretation which conveniently supports your comfortable beliefs.

If you’ve not yet watched John Piper’s most recent Look at the Book series, Finding Meaning in the Bible, I highly encourage you to do so. In one of the early sessions, he talks about The Golden Rule of Bible Reading. Just as we would like people to understand what we actually mean by our words, so we need to find the intended meaning of the biblical authors, not superimpose on Scripture our own preferred meanings.

This reminds me of the challenge small group Bible studies face where the main question can easily become “What does this passage mean to you?” instead of “What did it mean to the author and original readers?” Only when we ask that second question can we then figure out how to properly apply God’s Word to our own lives. (Of course there are numbers of passages where we can’t be 100% certain of the meaning. But overall, there is much clarity of meaning in Scripture. Otherwise, reading the Bible would be meaningless because the Holy Spirit could never change or transform us through words we can’t know the meaning of, or to which we can feel free to ascribe any meaning we wish.)

So we need to teach people not just to read the Bible but also how to interpret it, so they don’t end up being Bible-believing heretics or Jesus-followers who follow a Jesus different than the real Jesus of the Bible and history.

So we need to teach people not just to read the Bible but also how to interpret it, so they don’t end up being Bible-believing heretics or Jesus-followers who follow a Jesus different than the real Jesus of the Bible and history.

I find myself wishing people would know they are denying Scripture, and not feel free to use Scripture to deny Scripture. If you’re aware that you disbelieve and reject the Bible, there is hope because you can come under conviction to submit to God by denying your preferences and accepting what Scripture actually says. But if you imagine you believe the Bible all along, when in fact your interpretations contradict it, pride can blind you from knowing the truth and therefore the truth cannot set you free.

For more on this subject, see Randy’s devotional Truth: A Bigger View of God’s Word.

This article appears here on www.epm.org. Used with permission.