Give Hope to Children in Malawi

In the small, landlocked African country of Malawi, a majority of girls will not finish primary school. Most of their families live on less than $1 per day, staggering under the weight of crop failure, rampant government corruption, and the HIV/AIDs pandemic. Given the cost of secondary education and high rate of adolescent pregnancy, Malawian girls have a slim chance of remaining in school past eighth grade.

Fortunately, Malawian girls in 40 public schools have the opportunity to hear Bible teaching each week through Walk Thru the Bible instructors. By training local leaders to reach their own people in Chichewa, the local language, Walk Thru the Bible Southern Africa is making an impact on young girls like Memory and Lydia. 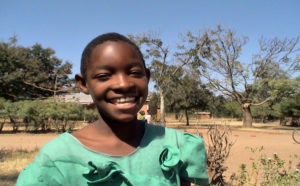 Memory, a fifth grader at Katelera Primary School (pictured), has developed faith in Christ as she learns about biblical characters whose lives make sense in her cultural context. She found particular significance in the story of Joseph. Though Joseph’s brothers sold him into slavery in Egypt, he forgave them and provided them with food to survive in a time of severe famine.

For children like Memory, who live in an agricultural society plagued by food insecurity, offering food even after betrayal is a powerful sign of forgiveness and blessing. “I have learned that forgiveness and love go together, and I have learned to have faith in the Lord Jesus Christ,” she said. Through localizing stories from the Bible, Walk Thru the Bible instructors are making a powerful impact on children like Memory.

Lydia, a sixth grader, has also encountered Christ through the lessons she has learned through Walk Thru the Bible. She comes from a Muslim family, and says that “In Islam, we are taught that women cannot be used by God, but in Christianity, women are used by God to do greater things. I will keep going to these lessons to learn more of the good news of the Gospel.”

Walk Thru the Bible will bring biblical teaching to more than 7,000 Malawian children this year—many of them young girls who have a narrow window in which to learn. For Memory, Lydia, and many others, simple lessons from the Bible are making a life-changing impact.

This #GivingTuesday, will you give the hope of God’s Word to people like Memory and Lydia?