Tim and Ben Blycker can’t remember a time when they didn’t know the Bible forwards and backwards, in English and Spanish. Growing up on the mission field in Guatemala City, Guatemala, and Puebla, Mexico, they heard hundred of sermons before they could even talk.

The Blycker brothers have always shared an unflagging commitment to reach the unreached and visit the unvisited. The less a people group knows about the Bible, the more excited they are to impart their knowledge. Since 2000, Tim (pictured above) has worked with Caminata Bíblica, WTB’s Latin American arm, to train and equip leaders across the region.

Ben took a more circuitous path to ministry with Caminata Bíblica. He and his wife, Angela, have spent most of the past decade serving in Mexico. They initially moved to Puebla to install water wells with a faith-based nonprofit, but the organization changed plans soon after their arrival. “I said, ‘Okay, God. You got us here and now the rug has been pulled out from under us. So now what do I do?” Ben remembers.

A few years later, Ben and his family found themselves at a similar crossroads in Oaxaca. There are 130 languages spoken in the state of Oaxaca, making the region particularly ripe for harvest for translators. While Ben is not a translator, he went to work for a studio that creates audio recordings of Scripture in various languages and shares them with Indigenous communities. Again, through no fault of his own, the job fizzled out.

In 2019, Ben’s perseverance paid off when Tim asked him to organize two otLIVE trainings in Oaxaca after undergoing training himself. “I absolutely loved it,” says Ben. “I’m not a preacher; you don’t want to listen to me deliver a sermon for an hour. But I have found that Walk Thru the Bible’s methodology fits like a glove and gives me a way to communicate with diverse audiences. It provides just the right balance of structure and flexibility.”

Encouraged by the response of the first audiences he instructed, Ben began joining his pastor inOaxaca on visits to seven local Christian drug and alcohol rehabilitation centers. In these facilities, he teaches otLIVE to men and women with little to no biblical knowledge—a challenge that he has always embraced. “These are people off the streets who have never been encouraged to read the Bible,” he says. “They are always so eager to learn and grateful that we came, because they have not heard anything that we teach.” 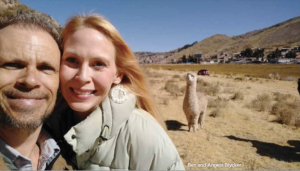 Ben has also taught otLIVE in non-Spanish speaking churches in the state of Oaxaca. It takes 6 hours instead of 3 to teach the material with a translator, but he finds it well worth the effort to teach people who might not have any resources but the New Testament in their native language.

In the course of his ministry, Ben has discovered that in the absence of training opportunities, many Mexican pastors only possess slightly more biblical knowledge than their congregations. “After live events, I’ve had pastors tell me that they learned about the northern and southern kingdoms of Israel for the first time,” says Ben. “No one had ever explained these things to them.”

He also encourages pastors to consider the value of approaching biblical teaching sequentially rather than topically. When they bounce around between books and chapters on a weekly basis, they miss an opportunity to tell a story to the members of their church. “I often use an analogy,” says Ben. “What if I started a conversation with, ‘I’ve been married 24 years. Let me tell you about my family.’ And then I stop and say, ‘Wow, I just love those trees out there. What kind of fruit is that?’ And then I comment on a dog nearby. The people around me would wonder what I was doing. That’s what it’s like to read a different book or chapter or verse of the Bible from one day to the next. You don’t get to read the entire story as it is meant to be read.” One of the things Ben appreciates most about Walk Thru the Bible is that it equips him with a tool to present a unified narrative.

As the door to new ministry opportunities was swinging wide open for Ben, it was also opening up to new ministry arenas for Tim. Tim had taught Caminata Bíblica’s events and resources in nearly every Latin American country, but Panama always remained elusive. Finally, years of prayers for God to create an opening paid off when Caminata Bíblica received an invitation from AIEPAMCA, an evangelical association in Panama, to teach otLIVE at an interdenominational meeting that drew church leaders from across the country.

Tim and his wife, Debbie, joined Alejandro Oviedo, Walk Thru’s Regional Director for Central America, to train 20 new Panamanian instructors in the summer of 2022. To their delight, Ben and his son Anders were able to join them, bringing the count of Blyckers up to four. After several days of training, 20 new instructors returned home to teach in their own communities, establishing a foothold for Caminata Bíblica’s ministry in Panama for the first time.

Not long after the training event in Panama, Tim headed south. Several years ago, Tim and Alex Colombo, WTB’s Regional Director for South America, traveled to the interior jungle region shared by Colombia, Venezuela, and Brazil to teach and encourage Indigenous people groups. They weren’t the first ones there.

More than 70 years before their arrival, an intrepid American missionary named Sophie Mueller had devoted her life to reaching these groups with the gospel. By the time she died, she had established 300 churches, translated the New Testament into several languages, and founded the Biblical Institute of the Word of God, which has produced more than 450 graduates.

The Colombia Bible Society took up the mantle after her death, working to deliver Bibles in Indigenous languages to those who are hardest to reach. This mission was especially critical because Sophie had not had the opportunity to translate the Old Testament. Over time, some communities began to claim that anyone who attempted to read it was cursed.

The Colombia Bible Society recognized a dire need for biblical training and invited Caminata Bíblica to teach otLIVE to a group of 40 trainees from across the region. Tim and Alex remember the experience as nothing short of electrifying. “What an incredible opportunity to teach the Old Testament to people who don’t even have a translation in their language yet,” says Tim. “We get to tell stories no one has heard before, and we watched the lightbulbs turn on. They began to understand the New Testament better because of what they learned about the Old Testament.”

For the Caminata Bíblica team, starting from scratch presents a unique set of challenges. “The Indigenous leaders don’t know the difference between Adam and Moses, so you can’t skim over anything,” says Tim. “You can’t use David and Goliath as an analogy, because they don’t know who David and Goliath are. Everything is brand new.” The training event moved more slowly than usual because it required translation into multiple Indigenous languages, but the trainees were not deterred by the extra time that was required to complete their training. Many had already traveled at least 3-4 days by boat to be there, and they soaked up every minute.

The Caminata Bíblica team aims to equip enough Indigenous leaders to take their newfound knowledge and become missionaries to nearby communities. If even 40 leaders travel to 10 communities, they will reach all 400 communities that originally received the gospel from Sophie Mueller.

Tim has now taught Caminata Bíblica’s resources in 15 countries across Latin America. While Ben has some catching up to do, he is fully committed to stepping into more spaces where people have never received any biblical education or training. Whether the brothers are ministering separately or together, they are linked by their lifelong passion for venturing far off the beaten path to share God’s Word with the unreached.

or Ben, one of the most encouraging aspects of serving with Caminata Bíblica has been the feedback he receives after teaching events. “There is nothing more exciting than getting a note from a 68-year-old who has just learned something for the first time, or a 12-year-old who was never interested in the Bible until coming to otLIVE,” he says. “There is life change happening all around us.”